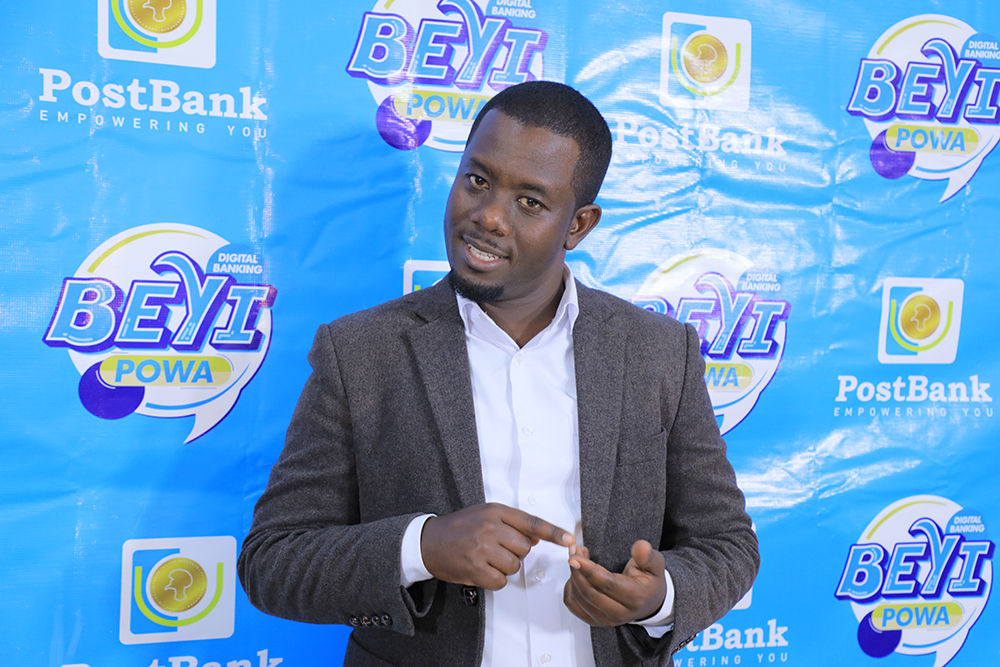 Richard Tuwangye aka Amoosi. He says he is very happy to be a part of PostBank’s digital transformation journey

Tuwangye, who like other artists largely depended on weekly comedy shows to sustain his life, is ecstatic about the new opportunity and working with the bank. “I am very happy to be a part of PostBank’s digital transformation journey.  As you may all be aware, we are in very unpredictable times Beyi Powa therefore comes as a savior in the whirlwind of uncertainty since one doesn’t need to make sporadic movements,” he said.

He added that, “the total lockdown drastically increased my appreciation of digital options available to me because the people viewing my art increased by more than 10-fold. So, I am excited to have the responsibility to preach the gospel of digital options, their efficiency and their benefits because I have experienced them first hand.”

The Beyi Powa campaign was launched two weeks ago to sensitize the bank’s customers about its alternative banking channels to promote adoption and usage. These channels are; PostApp, PostMobile, UnionPay PostCard and PostAgent.

Doreen Nyiramugisha, the Head of Marketing and Communications at PostBank Uganda said that, “Tuwangye is not only a customer of PostBank but also a great ambassador for this campaign. We believe that by working with him, he will help us sensitize our customers about our affordable digital banking channels because he resonates with many of them.”

As an ambassador, Tuwangye is tasked with promoting digital banking among his peers and customers of the bank through electronic, outdoor and print media as well as his social media platforms which attracted more fans during the lockdown.

On 30th March 2020, when the president instated nationwide lockdown, the Arts and Creative sector from which Tuwangye makes a living was not spared and is still among the hardest hit. With social distancing being widely adopted as a measure to curb the spread of COVID-19 it was only inevitable that cinemas, casinos, nightclubs and theatres that required communal gatherings and interactions remained closed.

Tuwangye noted that he has since the closure of the national theatre where Fun Factory films and dramas are produced, resorted to doing online comedy skits through his social media platforms including Facebook, YouTube and Twitter to be able to reach his fans and enable them enjoy comedy in the comfort of their homes.

Fun Factory, a popular Ugandan comedy production house has also been applauded for contributing towards the fight against the COVID-19 pandemic in their first ever music project dubbed #YambalaMask that featured a number of actors and comedians including Tuwangye.