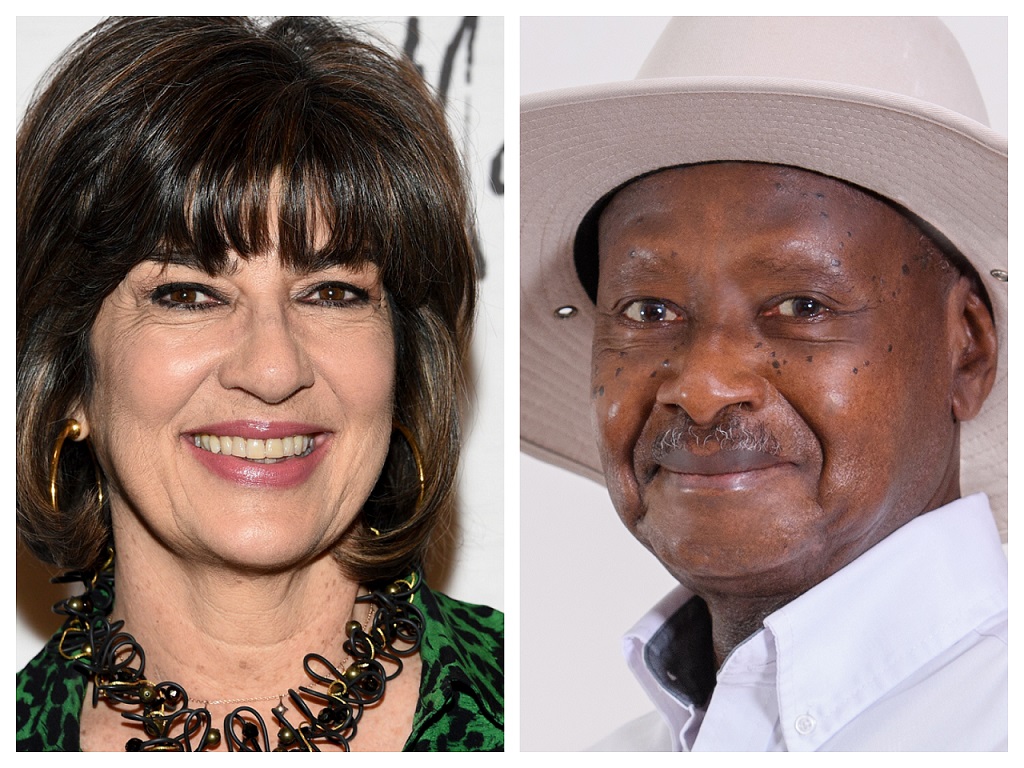 Buoyed by a recent Afrobarometer poll that puts him a comfortable lead against all his opponents combined, a bullish Museveni (right) told CNN’s Christiane Amanpour (left), that he is confident of victory on account of his solid performance record.

Christiana Amanpour: Okay, listen, I want to start by asking you, you know, 80% of your country is under 35 years old, they were not even born when you first came into office, and they really seem to want to change, they want jobs. Why do you think you deserve another term?

Christiana Amanpour: So, Mr. President, as I said, they want jobs. Uganda today remains one of the poorest countries in the whole wide world and depends hugely on foreign assistance. I want to ask you 35 years ago, you said, the problem of Africa in general, and Uganda in particular, is not the people, but leaders who want to overstay in power. Now, you have seen that your country has now changed the two-term rule, they’ve changed the age limit. And then you are going for a sixth term. Why do you think that is a good thing?

President Museveni: You should check your facts. It (Uganda) is the fifth fastest growing economy in the whole world. You should check your facts. It’s about to become a middle-income country. Now, regarding the politics, the management of society, yes, I said, staying in power for a long time without democracy; without democracy; mark those words. But if it is, the democratic will of the people, because we have so many things to deal with, we need all hands on board, then it’s correct that we have all hands on board.

Christiana Amanpour: You call yourself still a freedom fighter. I want to read to you the words of your main opponent, Bobi Wine. A young man who seems to have energised young crowds. He basically said in one of his songs, what was the purpose of liberation? When we can’t have a peaceful transition? Freedom Fighters become dictators. He sang that in 2018, in the song, Freedom. He has a point, right?

Christiana Amanpour: Well, we have seen it we’ve interviewed Bobi Wine. It is all over the international press, that he has been, you know, attacked. A member of his team has been killed. He is not able to go to big rallies, he’s been jailed. How is that fair in terms of a level playing field for contesting the elections?

President Museveni: Well, first of all, we have saved our people from dying in big numbers from Corona- have you heard of Corona? It has been killing people and has killed very many people in Europe and in the United States. Here, we have only lost about 300 people now. We have been able to do that by stopping public gatherings. Now, Mr. Bobi Wine was one of the people who was defying that. In other words, causing the spread of the virus. That is how he run into conflicts with the law. That’s how it all started. And then they tried to blackmail the country by rioting. You have seen what rioting is in Washington. It was really good idea. Those rioters who attacked the parliament building in Washington. But we are very happy that our people not died, like they have died in your places.

Christiane Amanpour: Well, actually Mr. President, let me just stop you there. Because obviously we know what Coronavirus is. You were also holding rallies the same size if not bigger than Bobi Wine’s. So that’s, you know; that’s one case. But here’s the thing, Mr. President, there are 54 people who were killed in the situation by your security forces in November. Why does he have to campaign in a flak jacket? Why did 54 people have to die?

President Museveni: 32 of the 54 were rioters who were attacking Security Forces. That’s how they died. I hear you now in the US talking of insurrection. And you are saying insurrection is a bad idea. This (the Ugandan riots) was a form of insurrection. They were suppressed, when they were attacking security forces. There are others- 22, who died through circumstances which we’re still investigating.

Christiane Amanpour: The UN says we’re gravely concerned by the election-related violence, the excessive use of force by security personnel, as well as the increasing crackdown on peaceful protesters, political and civil society leaders and human rights defenders. So the UN that’s the UN saying that it’s the security forces. Your own security forces, I mean, to be honest with you, he really shocked me recently, because he said that “we are proud of cracking down on reporters.” He said, we beat reporters for their own good, I don’t understand why you keep putting the blame on them when your security forces are doing this. And what’s the point of it? I don’t understand.

President Museveni: We have cameras all over the place. If the security forces are the ones who make mistakes, it is easy to see, to capture and identify. In any case, nobody knows more about Uganda than ourselves, I am here, I have a lot of experience and I can tell you who is in the wrong and who is in the right. So the UN should; the UN have got enough trouble spots in the world to deal with.

Christiana Amanpour: Are you basically saying you’re above the law? I mean, I’m not sure what you’re saying. Because you know, human rights are an international concept. And as you know, Bobi Wine is proposing that the International Criminal Court, which is an arm of the United Nations investigate you and your senior officials, for human rights abuses. There’s a 41-page brief, saying the police and military have deployed, quote, “widespread use of shoot-to-kill, beatings and other violence.” If you have all the images, and you’re confident of your evidence, will you hand it over for such an investigation?

Christiana Amanpour: Well, you know, President Trump said that in the United States as well. And you saw, as you mentioned yourself, the incitement to insurrection, the storming of the Parliament, the cradle of American democracy, by radicals and by insurrectionists. I just wonder what your view on that is? What would you say to President Trump about that?

Christiana Amanpour: Well, as you know, The House has already put forward formerly, one article of impeachment on the charges of inciting insurrection. So I want to ask you, then, if you should lose a fair election, will you accept the result?

President Museveni: If I lost a fair election, I will accept the results of course, because Uganda is not my house. I have got my house. I will go to my house and do my own things. If the people of Uganda don’t want me to help them with their issues. I will go and deal with my personal issues very happily.

Christiana Amanpour: I do need to ask you a final question. And that is your your constant haranguing and harassment of the gay community in Uganda. The head of the gay rights groups there says it’s actually a really scary and rough time. LGBT people are fearful to even vote, as there is a risk that they will be targeted at the polling stations due to all the hate speeches. What are you afraid of? What Why does this group over the years, why is it so utterly oppressed and harassed?

President Museveni: Who’s haranguing the homosexuals? Who has harangued them?

Christiana Amanpour: You and your government, your churches, talk about them, you know, maybe security people but people in the streets as well. There is a climate of impunity in Uganda for anti-gay opposition and harassment and oppression. Why? Why in 2021? Is that the case?

Christiana Amanpour: Well, as you know, they have been targeted. And that’s why there is a worry, including by human rights groups. But I want to ask you this, you know, I can see just like I can see in the United States, when you whip people up with misinformation, disinformation, sometimes lies about people, you can get a frenzy and a mob and a fear and people who don’t know where the truth is. And I know that in parts of Africa, homosexuals are promoted by the church by others, as deviants, as you’re saying, as pedophiles, and it’s just not true. And I wonder whether you think that you’re a Christian, your wife is a Christian, whether you think that’s charitable, and whether you think that perhaps you can actually move forward with a different view to that segment of your population, because as you say, they are Ugandans they’re there to stay. It’s not fair.

President Museveni: No, the prevalent opinion among our population now, is that the homosexuals are a departure from normal, if our opinion changes in the future. Let it, it change organically but not imposed on us by others.

Christiana Amanpour: Nobody nobody’s imposing on you, Mr. President. It’s not like the international community is telling you anything in this regard about promotion or anything. It’s just about human rights. Mr. President, thanks for joining us from Kampala.

Thank you very much.