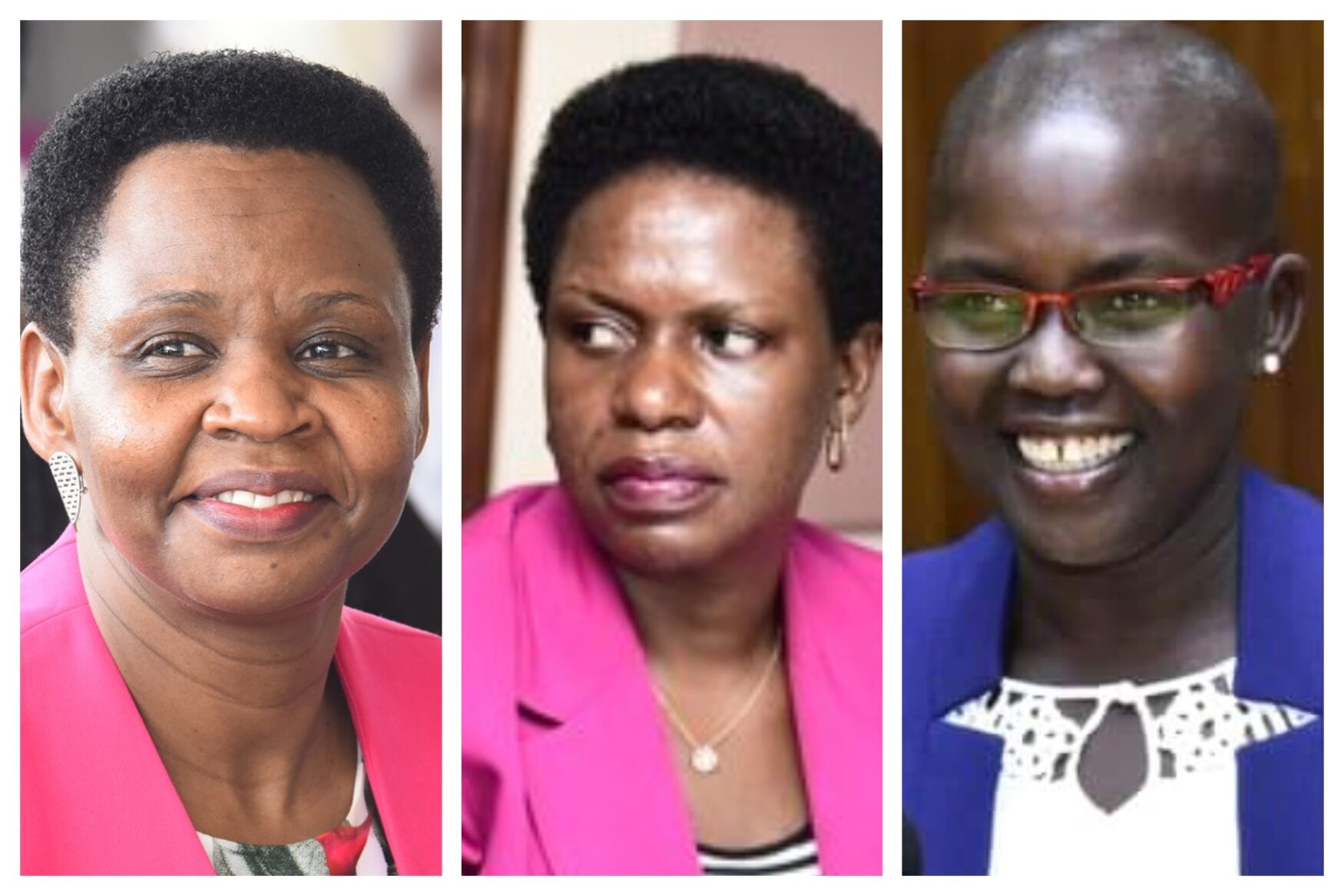 SURROUNDED: Mrs Sylvia Muwebwa Ntambi the Chairperson of the Equal Opportunities Commission (centre) is legally besieged by Lt. Col. Edith Nakalema, the head of the Anti-Corruption Unit of State House and Jane Frances Abodo, the Director of Public Prosecutions.

The Anticorruption court’s Chief Magistrate Pamella Lamunu Ochay has threatened to order the arrest of Sylvia Muwebwa Ntambi, the Chairperson Equal Opportunities Commission should she fail to appear in court on 29th October to face charges of conspiracy to defraud and corruption.

Muwebwa was to appear in the High Court on, today, Wednesday 7th October, together with her 9 co-accused but did not show up. This is the third time she is not showing up to face charges that could earn her up to 10 years, if convicted.

Prosecution’s James Khaukha told the judge that the court was only waiting for Muwebwa to plead to the charges so all the accused can be committed to court for trial, since all investigations are complete.

The judge said that the nine other accused persons equally needed to be accorded fair treatment which is why she needs to appear without fail on the 29th of October.

This followed Muwebwa’s Lawyer Mcdusman Kabega, telling court that the accused was admitted with migraines and hypertension crisis at Medik Hospital in Kampala.

Muhebwa is jointly charged with nine other Commission Officials who are facing 26 counts that include embezzlement and causing the government financial loss of UGX 245.5million.

According to a charge sheet signed by Jane Frances Abodo, the Director of Public Prosecutions, Ntambi and the co-accused “between 19th November 2018 and 3oth April 2019 conspired to defraud the government of Uganda a sum of Uganda Shillings Thirty-Five Million, Two Thousand (UGX35,002,000). The money was “purportedly for undertaking an audit exercise of Rural Electrification Programme in Uganda” which activity is said not to have taken place.

The Chairperson is also involved in another conspiracy to defraud charge, involving UGX9,480,000. In this particular case, she is jointly charged with Mujuni Mpitsi, Agnes Edith Kamahoro, a Senior Personal Secretary and Olwor Sunday Nicholas, the Commission’s Undersecretary.

A new whistleblower has since written to President Museveni, accusing Muwebwa of embezzling the Commission’s funds through inflated and non-existent trips abroad, workshops, and seminars.

The prosecution says the accused officials conspired and requisitioned, approved, and forwarded the said monies for payment purporting that it was going to conduct sensitization activities in Karamoja Sub-region; to undertake an audit exercise of rural electrification program in Uganda; for development of 1 and 2 draft Commission HIV/Aids workplace policy; for monitoring exercise in Lower Local Government and for sensitization on equity and rights issues in lower local govt whereas not and which action they knew would cause financial loss to the Government.